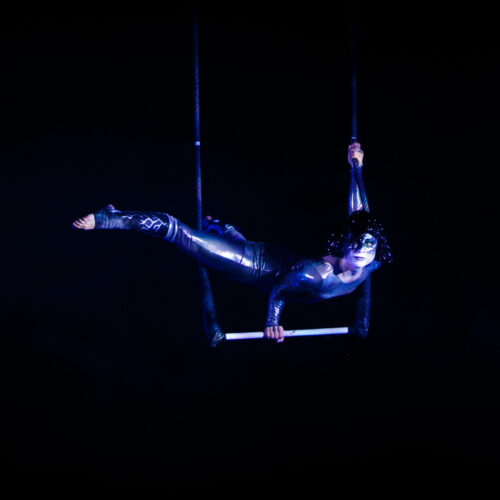 Sonia’s mother is said to have done aerial cartwheels until she was 7 months pregnant so it came as no surprise when little Sonia loved to be upside down. As a little girl she could often be found inventing basic partner acrobatics tricks in the backyard with her family. She went on to be a competitive gymnast for almost 10 years and after turning in her grips she became a gymnastics coach.

Many years passed and Sonia started her career as an Assistant Professor of Family and Integrative Medicine and had 2 children (now little aerialists themselves). In 2009 she saw her first aerial performance; five years later she finally tried it for herself and was immediately hooked. Sonia has performed static trapeze and partner acrobatics in Night Flight student shows, Fright Night, and at the Curious Comedy Theater and ECHO Theater Company. She is beyond thrilled to debut as a duo aerial chains artist with the incomparable Kate Makkai.